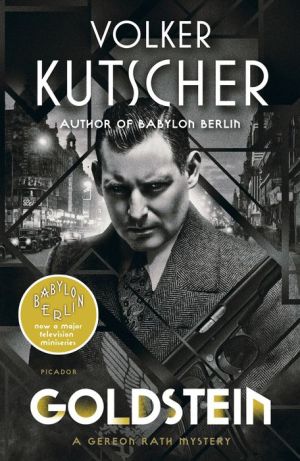 Goldstein: A Gereon Rath Mystery by Volker Kutscher Volker Kutscher, author of the international bestseller Babylon Berlin, continues his Gereon Rath Mystery series with Goldstein as a police inspector investigates the crime and corruption of a decadent 1930s Berlin in the shadows the growing Nazi movement. Berlin, 1931. A power struggle is taking place in Berlin's underworld. The American gangster Abraham Goldstein is in residence at the Hotel Excelsior. As a favour to the FBI, the police put him under surveillance with Detective Gereon Rath on the job. As Rath grows bored and takes on a private case for his seedy pal Johann Marlow, he soon finds himself in the middle of a Berlin street war. Meanwhile Rath's on-off girlfriend, Charly, lets a young woman she is interrogating escape, and soon her investigations cross Rath's from the other side. Berlin is a divided city where two worlds are about to collide: the world of the American gangster and the expanding world of Nazism.